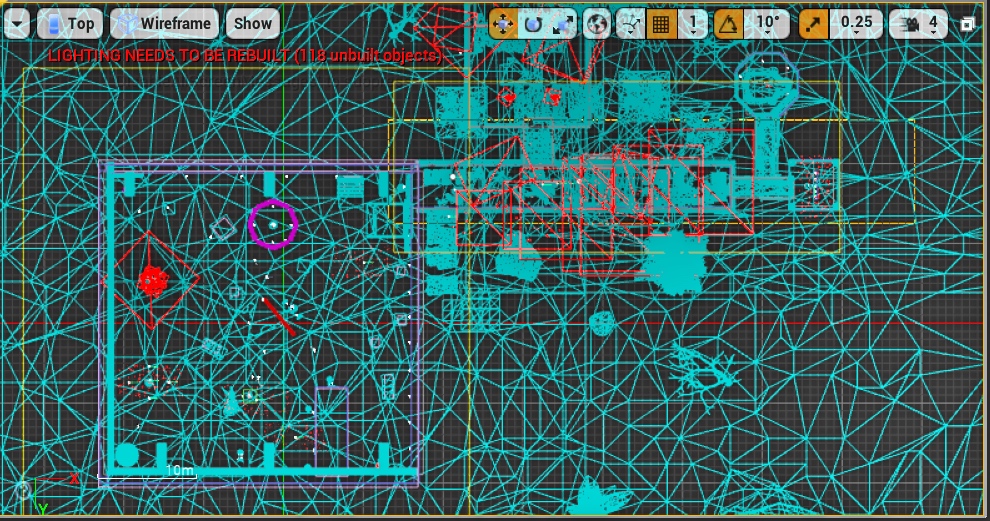 A Journey Into Spatial Sounds in Unreal Engine 4. Download and play!

It was the second time I’ve worked with UE4, and all the process went so smooth and straightforward, much more comfortable and with better results than in Unity, that I decided to dive deeper into the UE4 platform and create my own Spatial Audio Project for that.

I have a bunch of songs I created using Artificial Intelligence, pretty easy to deploy them into UE4 and make things happen…

Take a listen to them

Well, things are not that easy.

How can a Sound Designer build an entire World inside Unreal?

Research is the answer. There are tons of tutorials online. Basic knowledge of C++ and how things work inside a game engine helps. A lot.

Even without any previous knowledge of building materials, meshes, colliders, and so on?

Yes. Like in Unity, there are plenty of free packages of materials, particles and meshes to download and start working. And they’re all in good quality.

How do I make a VR player interact with the ambient I intend to create? How things work (apart from Audio) inside UE4?

That’s the biggest question. There’s an initial template available, so that gave me the necessary abilities of interaction and walking around.

This is where I started with this basic template:

And this is what I’ve created in the end:

When things were quite the way I “wanted”, I went further and added more interactivity, and created new ways of listening to Music inside a VR ambient.

Now I can say that I’m able to deliver at least a reasonable level prototype in Virtual Reality and First-Person modes in Unreal. Not only the Audio but a complete package of interactions, ambients, designs, functionalities and everything else.

*Notice that all videos were shot while I was using my HMD, so only the right eye is on the screen.

For downloading the full experience for HTC Vive go to this link — https://1drv.ms/u/s!Ass2QbRc4bnYhV-4ANOGweLNdZwd?e=gNGNpt

Each area of the project has a different way of experiencing Audio.

For starters, there is that voice telling you that the experience is a “Journey into Sound”.

Yes, that famous speech from Geoffrey Sumner at the “Train Sequence” on “A Journey Into Stereo Sound” 1958 album of sound effects, music and noises from London FFS Recordings.

Then you can start walking around the space and experiencing each one of the possibilities of Spatial Sound, such as this blue cloud with whispers.

And also this Song where the middle big red dot gives you a perspective of a sweet spot, but you can go behind each one of the particle emitters and listen to each part separately.

Then you can move to the objects at the scene. Go to the lamp, the pipes, the big black machine in the corner, the statue and even the wires. They all have their sound.

This girl, courtesy of the fantastic 3D artists Miguelangelo Rosario, for example, had no original sound. So I’ve provided her with a complaint. What are you looking at?

There’s even a Binaural Sound emitter. You can place yourself in the middle of the field and listen to the different frequencies in each ear, creating the binaural effect for concentration purposes (16Hz directly in your brain). A good idea for the future — create a Binaural Beats relaxing environment in VR.

And there’s another song, with the same concept as the first one. Move around. Listen to each one of the stems separately. Or stay in the middle for the sweet spot.

The dancing girls, courtesy of Miguelangelo again, are dancing to the tune that comes out of that big boom box. And if you stay behind one of them, you can hear that she occludes the original audio while dancing.

While going out in the open, you can listen to the snowstorm.

And you can visit the graveyard to listen to the fire torches, the eerie music near the tombs and the crow at the nearby tree.

Moving to the other direction, you get into a greenhouse, where birds sing, and there’s a Bossa Nova tune going on. Further explanations about the gigantic statue are there too.

At the end of the footbridge, you can go three ways:

-The first one, right in front of you, makes you play with spheres and their sounds. Just grab one of them and throw it away.

-On your left, you have a dark room, with more whispers, another eerie tune and a candle in the middle.

-And if you decide to go even further, there’s the Groove Master (Miguelangelo’s animation too). The dancing guy is having a good time while listening to another song.

I intend to go ahead and develop more music and sound interactions inside this same environment, but for now, I think that’s it.

It has good examples of Spatial Audio, occlusions, loops, placements and possibilities of Audio inside the Unreal Engine.

If you want (and have an HTC Vive there plugged in your Windows computer), you can download the project and play by yourself.

And if you want to check the complete walkthrough, here it is:

Also, some more images of the development.